Mysteries in my life bother me. A lot. They don’t bother me in the way that an unresolved movie intrigues me, or how you might see a single shoe on the side of the road. I know that they will live happily ever after (once the snake digests them) and that raccoons typically just get full after the first leg.

What i am talking about here is two-fold: why on earth people do they things they do the places they live and “how was this originally.” This obsessive mindset is incompatible with sane restoration.

When we moved in, we had a few small clues that there was once a fireplace in our house. The most obvious ones were that most bungalows have them, and the fireplace-shaped mark on the wall, hiding behind the covering paper: 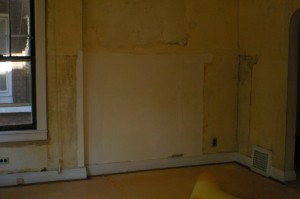 Dramatic pics after the jump!

The trail ran cold beyond that. We knew there was one, but had no idea how it looked. For the last 2 years we have had fits of research that have revealed very little. We bought books (which are worthless because apparently all the photogenic bungalows, like people, are in California), we went to the Historical Society (also worthless because old time people didn’t want to waste expensive film on taking pictures of fireplaces), we posted on messageboards, and we quizzed our neighbor, Lil, whose house is identical to ours and had lived in the house 80+ years. She said she still had the bookcases that flanked the fireplace, but her dad took the bricks out ages ago. We weren’t allowed into her house, so the answer was 20 feet in front of us, behind a closed door.

Sadly Lil passed away a few weeks ago when her kitchen caught fire. It was a sad and confusing time for us. The light in the situation is that we got to meet her lovely family (again, photogenic Californians, who probably live in a bungalow!) and we have tried to help with the house situtation as much as possible.

Last Friday, while seeing the progress on clearing out 80 years of stuff, we noticed some shelves in a corner. It was like a spotlight had shone down. The fireplace shelves! There they were! We had finally found the key to a mystery that was vexing us from day 1: 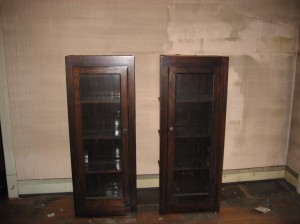 This discovery solved nearly all of our fireplace problems. It fixes the question of what to do where the wall dips between the window and stained glass (the left shelf is shallower), how tall they should be, what they looked like, how they were constructed, how integrated they were, and on and on. Luckily they should be very simple to recreate. So, as you might have seen previously, we revealed the stained glass, now all we have to do is some woodwork and masonry. Simple!

Here is a terrible mock-up of what the room may look like w/ the new fireplace: 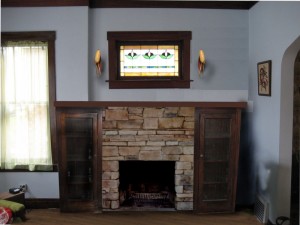 If you have advice or pictures of your own, we would love to see them. Thanks.

3 thoughts on ““Drawn by Quest for Fire(place), They Searched All Through the Land.””